This is my take on the Negroni for Negroni week. It substitutes Cachaca for Gin, giving the drink a smoky spicy flavor. I recommend Punt e Mes for the vermouth, it matches the Cachaca much better.

I toyed around with calling it Chaucer's Wife, but then I didn't (it's not a great name). 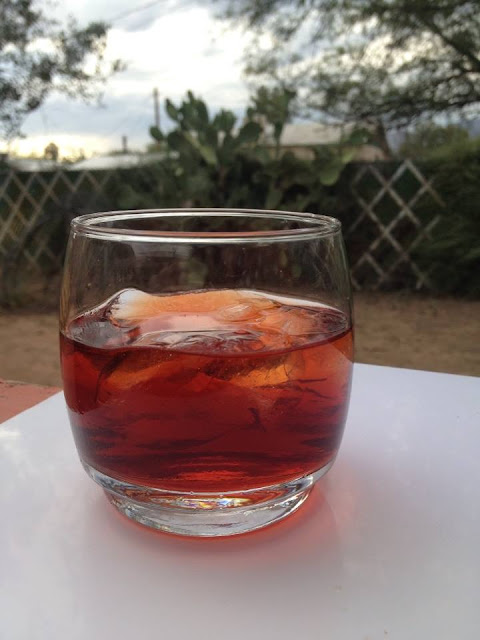 Stir and pour over ice in a rocks glass.


Lemon Mush is the super haute couture name for a preparation of lemon that I like to use in drinks when I want a more bitter and full lemon taste. Instead of using the juice of the lemon, Lemon Mush is made solely of lemon rind and white sugar. As a result it has a dry and bitter flavor as opposed to the sour flavor of lemon juice.

To make Lemon Mush first peel an entire lemon. Don't be afraid to get the pith in there as well. Most bartenders will tell you to avoid the pith because it has a much more bitter flavor, but the entire point of Lemon Mush is that it is a more bitter and concentrated lemon flavor than lemon juice, so don't worry about it at all.

Combine the rind and pith with 2-3 barspoons of white sugar and muddle thoroughly. The end result should be a literal mush. Unfortunately I had only had one lemon left and it was both a little old and very frozen--apparently it had been sitting too high in the refrigerator. As a result it didn't really want to mush very well. But still you should have something of at least this consistency: 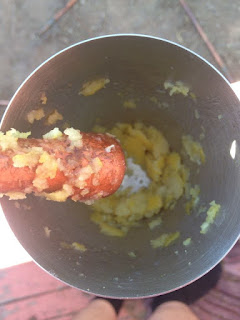 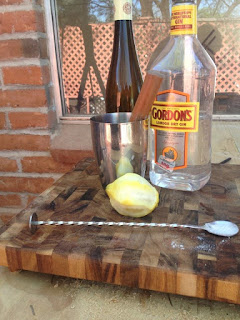 Don't worry about peeling the rind in small pieces, when I peel a lemon for mushin' I usually end up with six big sections of rind per lemon. You're really going to grind this guy down, so the starting size doesn't matter. Plus the more cutting and whittling you do, the more lemon oil escapes before you get the peel into the cup. A fresh lemon will turn into something with the consistency of porridge or oatmeal.

It's also really important to use white sugar here and not simple syrup. The granules of sugar are essential to the muddling process as they help grind up the rind and pith.

This does take a little time and elbow grease so it's not the best drink if you are in a rush. That being said it isn't so much work that you can't comfortably make a round for friends.

Next you want to combine the mush with your gin and dry shake (shake without ice) to get all of the lemon oil and pulp that's been flying around in there mixed with the gin. Finally add the vermouth, stir with ice, and double strain using both a Hawthorne strainer and a very fine mesh strainer or cheesecloth. I love my OXO Good Grips Mini Strainer, not only is OXO generally the best of all time forever, but it has two layers of fine mesh so you really don't have to worry about the pulp getting in your drink. 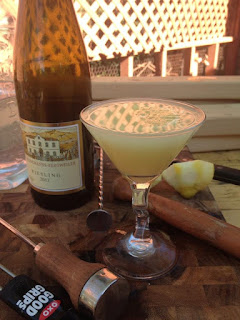 Stir with ice and double strain into a martini glass. Do not garnish.

The photograph has a lemon wedge garnish. I included this for the sake of the picture, I actually don't recommend using a lemon wedge in this drink. The sour flavor of lemon juice will quickly overpower the dry bitter flavor of the rind and pith. I also used my Wormwood Wine/Vermouth recipe here, it's decent if you want an extra bit of tang, but Martini dry vermouth balances the drink out a lot more.

Finally, you may be wondering why there is so much vermouth. The very oldest recipes for Martini's were equal parts gin and vermouth (please don't use vodka), and I wanted to stick with that for this recipe. Don't be afraid, the vermouth really fits the bitter lemon flavor very well.

Posted by Zombie Kill Girls Blog at 6:05 PM No comments:


Summer is starting in Tucson, Arizona, and it's the perfect time for the Rabo de Galo, a vintage Brazilian cocktail similar to the Manhattan, and one of my all time favorite cold, easy-to-drink, summer cocktails.

I learned about the Rabo de Galo (Portugese for “the Cock’s Tail”), from a Brazilian acquaintance on Reddit's /r/cocktails/ named Fabio Seitsugo. I had bought some Cachaca because I was working my way through PDT's cocktail book and I wanted to make their Caipirinha. I had always really liked Tiki drinks, and I tend to think that Rum is undervalued as a cocktail base, so Cachaca seemed like it would be exactly the kind of thing that I would like. 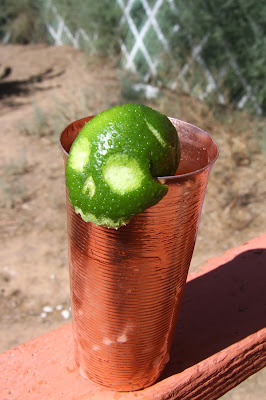 Unfortunately, it was not. Cachaca is much more similar in flavor to Pisco than it is to Rum, and I am not a big Pisco fan. My girlfriend, on the other had, is, and she loved Cachaca, so I wanted to find more recipes for her. A Redditor had posted about his attempt at the "Samba-em-Berlin", and Fabio responded to talk about his experience with cocktails in Brazil. I asked him about Cachaca based cocktails and he gave me a list of Classic Brazilian cockitails.

The Rabo de Galo was by far my favorite. It is bright, crisp, and a bit spicy thanks to the Vermouth. When I have Cachaca in the house it tends to be my go-to, simple, and easy to make 'light' cocktail. The Rabo de Galo definitely changed my mind about Cachaca.

Fabio sent me the following recipe, from SubAstor, a bar in Sao Paolo:

Stir all ingredients and serve over ice.


I changed the drink around a bit, good Cachaca isn't widely available in the States and so I adjusted it for the lower quality brands available here. Of those that are available, I tend to prefer Pitu and 61, but if you can get them, Fabio recommends Espirito de Minas while another friend of mine, who works at a craft cocktail bar in Tucson, recommends Ypioca. I also like to serve the Rabo de Galo in an aluminum cup chilled in a particular way: I rinse the cup with water both inside and out, fill it to the brim with ice, and let it sit in the freezer for about five minutes while still damp from being rinsed. This leaves a light frost on the outside of the cup and really cools the drink down. 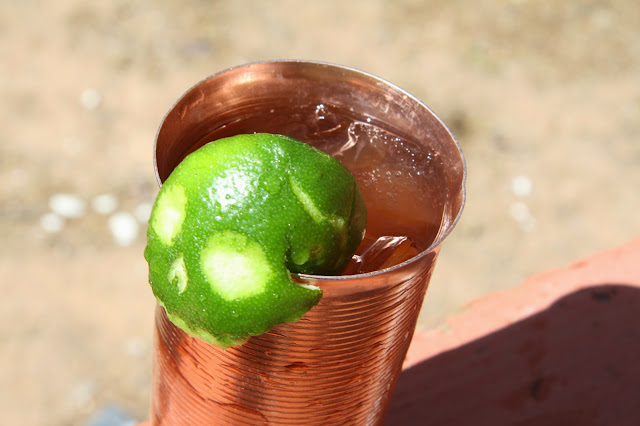 Stir all ingredients and serve over ice in a chilled aluminum cup.

Posted by Zombie Kill Girls Blog at 5:13 PM No comments:

Check out the roundup here, and thanks again to cocktail virgin slut for hosting this challenge and to all of you who checked out my page! I'm really excited to try out these new recipes!

It's a huge rush to see something I made get shared with such a large audience, and it's really inspired me to keep going. Like I said before, I've been tossing around the idea of doing this for a while, but I was too hesitant to put myself out there, and too insecure in my writing to ever feel comfortable publishing anything I wrote. Having a clear goal, and a way to really participate with a larger community that enjoys the same things I do, really pushed me through that initial lack of inertia and helped me see the joy in actually blogging about cocktails instead of just drinking (too many of) them.

I really look forward to posting more of my favorite cocktails and creations now, and I'm really excited to learn more recipes and cocktail history from all the people in the cocktail blogging community.

Posted by Zombie Kill Girls Blog at 10:09 AM No comments:

The City West; Mixology Monday; and my First Post!

I've been tossing around the idea of making a cocktail blog for a while now, and this Mixology Monday seemed like the perfect time to start. This challenge was the perfect opportunity both because I had recently been playing around with vintage rye cocktails and because having a firm deadline would push me to actually get something finished.

Despite my recent interest in rye cocktails I don't have a great collection of ryes or the experience to make a perfectly balanced Manhattan, so I thought I would try to make my own vermouth. After some research I discovered that vermouth originated from the German "Wermut" (lit. "wormwood"), a wormwood infused wine, and decided instead to recreate that. The closest thing to wermut that I could find a recipe for is a Romanian wormwood infused wine called "Vin Pelin" (lit. "wormwood wine"). The forum of Ms. Jekyll's Absinthe Blog has the following recipe:

Artemisia Absinthium, better known as "big-leaf" or "greater" wormwood, is freely available online--I bought mine from Raven Moonlight on Amazon.com, but Artemisia Pontica ("small leaf" or "little" wormwood, apparently the prime ingredient in Roman wormwood wine) was nowhere to be found. I ultimately decided to just try to make the infusion without the little wormwood, just keeping the original ratio of greater wormwood to white wine. I also went with German wine to make some attempt to stay historically/regionally accurate. I don't know anything about wine, so I chose based on Total Wine's flavor profile and the cost of each bottle. I ended up with Hans Schiller's "Qualitatswein Liebfraumilch" (apparently this translates to "quality wine, beloved lady milk,"), Dr. Heidemanns-Berweiler's Reisling 2013, and Rheinhessen's "Red Vin."

CAUTION: Wormwood, and other Artemisia plants, contain Thujone, a compound that can cause seizures and potentially death in large amounts. I DO NOT KNOW THE THUJONE AMOUNT OF THIS INFUSION. I drank a decently large amount (about a quarter of a liter of the finished infusion) as I was trying to come up with a cocktail and was fine, but I wouldn't suggest drinking large amounts of the infusion.

The best way to describe the flavor of wormwood is a slightly bitter Vermouth flavor. Liebfraumilch was by far my favorite wine to infuse, it is light, crisp, and citrusy and perfectly compliments the wormwood. The Reisling was too heavy and sweet and ended up muddling the wormwood. The Red Vin did well when infused with wormwood, becoming tangy and pleasantly medicinal.

I toyed around with a few different cocktail ideas before settling on my recipe for the City West (named after the largest commercial district in Berlin), which combines both red and white wormwood wine:


Stir rye, both wormwood wines, angostura, and sugar vigorously over ice. Strain into a coupe over a large ice cube (skull shaped if possible), and garnish with a Luxardo cherry.


Infuse each bottle of wine with 6.25 grams of greater wormwood and let sit for 24 hours, strain through a fine cheesecloth and refrigerate (see the caution above regarding thujone).

The City West is a lighter more citrus version of the standard Manhattan with a mildly bitter finish that combines with the chocolatey aftertaste of Wild Turkey Rye to make a complex and satisfying finish. Wormwood wine is much crisper than Vermouth, and the combination of both red and white vermouth wine is complex and herbal without tasting overly medicinal. White sugar replaces the sugar that would otherwise have been added in via the Vermouth and helps balance and tie together the drink. I added a large ice cube mostly because I like the way it looks rising out of the coupe above the drink but the wormwood wine is best very chill.

Thanks to cocktail virgin slut, Mixology Monday, and to all of you who decided to check out my blog's inaugural post. I hope you enjoy it!

Zombie Kill Girls Blog
I'm a former public defender that quit my job to try and become a professional artist and open a micro-distillery.